Pastor Joel Sutton comes to St. Timothy after serving over four years in his first call as pastor of St. James Lutheran Church in Holland, MN.  Pastor Sutton will be installed at St. Timothy on November 20, 2016.

Prior to joining the ministry he lived his entire life in Convoy, OH.  He was baptized at St. Paul’s Lutheran Church in Convoy, and was confirmed at Redeemer Lutheran Church in Convoy. He is married to Terri, and they are the parents of two children. Their daughter Jacelyn is married to Joshua Tempel and they have two children.  The family resides in Miamisburg, OH. Pastor and Terri's son Seth lives in Chicago, IL.

As a second-career pastor, Pastor Sutton previously worked as a residential carpenter, draftsman/designer, and as a manufacturing engineer.  In September 2008 he entered Concordia Theological Seminary in Fort Wayne, IN.  He served his vicarage at St. Thomas Lutheran Church in Ohio City, OH, and graduated May 18, 2012.  He was ordained/installed at St. James Lutheran in Holland, MN, on July 15, 2012. 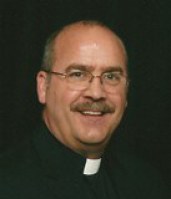